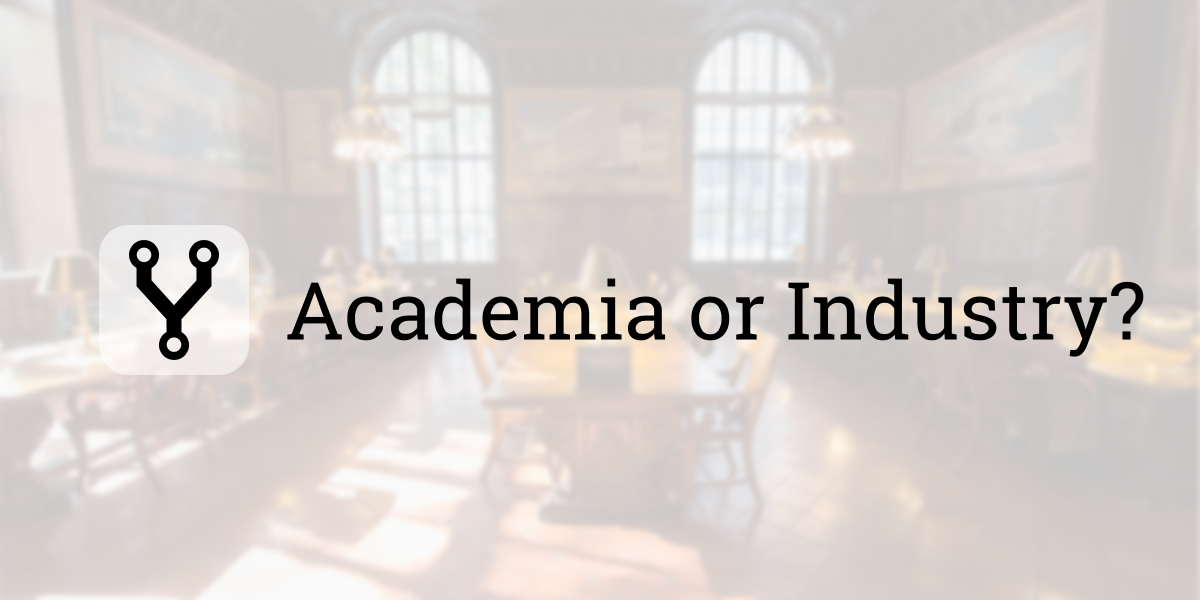 This is the final installment of a four-part series of posts I’m writing to crystallize my own thoughts on “The Question”: Academia or Industry? The question is framed dichotomously, but what it really is getting at is something deeper: You’ve deferred being an adult for a while now, but what do you want to do with your life?

In the first post, I briefly toured the many options. In the second post, I drilled down into the two major options and discussed how the decision comes boiled down to a matter of personal preference (e.g., more freedom but more stress and less money VS. less freedom but less stress and more money). And, finally, in the third post, I spoke about how the choice significantly and, potentially irreversibly, affects your professional development.

In this final post, though, I want to take a broader perspective. I’ve spoken about how the choice matters on a personal and professional level — but what about on a societal level? What does it say about our society that our great thinkers are skewed towards academia or industry or evenly balanced across both?

Disclaimer: I want to just remind everyone that I speak from the perspective of a computer science Ph.D. student at a highly competitive Computer Science school who has done 5 industry research internships — 2 at Microsoft Research, 2 at Facebook and 1 at Google. So, your mileage may vary. I am also not a (good) armchair philosopher, so this post is really more of a musing than anything meant to be taken seriously.

This Choice Is Societally Significant

Finally, while your choice is your own and you should make it based on your own personal preferences and professional aspirations, I believe that this choice is also one of societal significance.

To see where I’m going with this, consider this simple question: Where do we, as a society, want our best thinkers?

Do we want them cloistered in an ivory shell, tackling great, timeless intellectual problems and undisturbed by the bustle of the real world?

Do we want them in the weeds, hashing out immediately realizable solutions to the pressing problems of our time, but more directly exposed to the noise of market forces and selfish intentions?

This question is, of course, rhetorical. Your answer is your own and should not matter for anyone else. Nor should anyone else’s choice matter for your own [1]. And, of course, the two choices in theory, are quite different from the two choices in practice. Today’s academic, for example, is not really all that insulated from the real world. To get funding from agencies like the NSF requires a compelling argument for how your work has “broader impacts” on the problems facing the world today. There’s also the simple fact that you will still live in the real world and be affected by its problems, so it will be hard for those perspectives not to shape your own — academic or no.

But, I do think that the overall trend is something we should carefully mind. Nowadays, there is a blurred line between academia and industry. This is true broadly, I would argue, but I think it is especially true for engineers and computer scientists. There is now, more than ever before, a massive amount of tech industry and venture capital money being thrown at any idea with the slightest bit of novelty and a star-eyed founder with a dream. [2]

Some of that money trickles down into academia in the form of bounty-style research grants offered by industry behemoths like Google and Yahoo and Samsung. For example, Yahoo recently offered CMU’s School of Computer Science $10 million dollars in research funding to assist with pursuing research projects that are in Yahoo’s interest. And in the shadow of these massive deals are a number of much smaller ones: small, individual “gifts” of 10 – 15 thousand dollars given to professors to work on Android app privacy, or study how social networking sites affect people’s well-being.

These grants are often really great. It allows academics to have more real world impact while remaining in academia, for example. But, it could be the beginning of a larger trend of academia transforming into a collection of independent R&D units chasing bounty-style Research postings. In effect, this could mean that individual researchers and research labs may be little more than mercenaries in pursuit of solving problems driven by commercial interests.

I suspect that there will be two common reactions to that previous paragraph. The first reaction is that we’re already there, and have been, for some time. In fact, maybe the only thing separating present-day academia from this bold new world is that there are many layers of bureaucracy, sleights of hand and other indirections that obfuscate the connection between the commercial interests of industry and academia (e.g., lobbying efforts from large corporations that direct government funding of science). In fact, we can already see that some of the big problems being solved in academia are ones that are driven, either directly or indirectly, by commercial interests. A good example of this is the recent surge of interest in deep learning. Deep learning is powerful and interesting, but its most lauded applications are inspired by the commercial need to have better ways to make sense of loosely related but plentiful nuggets of information.

The second likely reaction is that academia would never morph into mercenary R&D units without first collapsing in on itself and then starting anew. The academics who choose that lifestyle will no longer be academics at all, and that will be enforced simply through social pressure — top journals and conferences may no longer accept flavor-of-the-month submissions with low half-lives; tenure promotions may not be granted to those whose work is primarily driven by these commercial bounties. Maybe that’s right. Still, I would argue that the transformation into mercenary R&D units is plausible. The pay-offs are potentially huge. For example, CMU just won a patent infringement lawsuit against Marvell Technology Group Ltd. to the order of $750 million dollars. That is a truly stunning amount of money — so what’s stopping CMU from becoming, say, Qualcomm Research: an entity that seeks to invent and patent foundational technologies that other commercial entities must license to use? That’s not necessarily a bad thing, mind you, but is that what we want?

Anyway, I don’t have the answer to that question, either. Perhaps in an ideal world, we’d have half of our great thinkers working on intellectually pure problems and the other half helping transfer those insights into artifacts and policies that can improve the human condition. And, perhaps both of these halves could easily transfer in and out of each other. But, if you look around and everyone is staying in academia or migrating to industry, then maybe that’s a broader, societal problem that we should consider fixing.

Bringing it all together

So, academia or industry? Of course, by now you know that I can’t really answer that question for you! I can’t even answer that question for myself, yet. But I can say that the choice is very significant: at the personal level, at the professional level and at the societal level. If you’re still confused: sorry. This series of posts was not really meant to be a “how-to” guide on making that decision. Still, I hope it at least provided you with some more context about why the decision matters and what’s at stake. If you make the decision with that in mind, you’ll make the right choice — whatever it happens to be, for you.

[1] Except for maybe your significant other, but I already spoke about that before.

[2] It’s natural to ask “why?” when hearing this. I don’t really know the answer, but my assumption is that it is fueled by an increasingly globalized economy that is aggregating money into truly massive hedge funds (on the order of hundreds of billions and trillions of dollars). To produce consistent returns of 10% or more on these massive hedge funds requires seeking many, diverse, and potentially large pay-off investment opportunities.

3 thoughts on “Academia or Industry? A Societally Significant Choice”