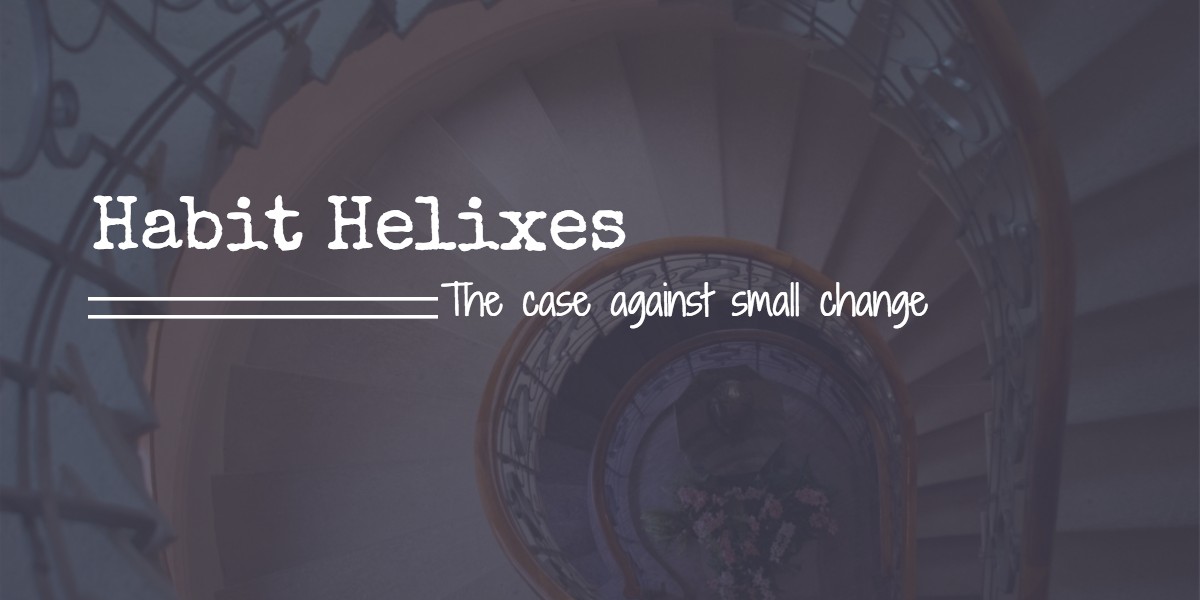 I’ve had some conversations with people about success spirals. Expectedly, some are skeptics. A common counter-argument is that success spirals are unexciting and slow [1]. Start with writing 1 minute a day? After a month, maybe do 10 minutes a day? How long will it take to write a novel with that level of commitment? Probably a very long time.

To be fair, the spiral structure is supposed to be a minimum, not a maximum. Making your initial goal small is just supposed to make it as easy as possible to endure start-up costs while building a productive habit [2]. If you are willing to do four hours a day when your spiral is only asking you to do 10 minutes, then you should do four hours [3]. But, small change can be boring. I get it.

This is especially true because we typically decide to make lifestyle changes at an emotional high: When we’ve had enough of not seeing to our own goals and desires. In this emotional state, reading advice about how you need to think small to do big can be demoralizing. You know what you want, and you want to get there without dawdling — you’ve done enough of that for a lifetime. It would, indeed, be a shame not to capitalize on your initial burst of motivation to get a head start.

Still, trying to make big, difficult changes immediately is a recipe for failure: if you resolve to write 2000 words a day, every day, starting tomorrow, there’s a good chance you won’t follow through after the first few days. It’s just too much of a deviance from your day-to-day life. If you’ll excuse the cliche, we are creatures of habit and will soon enough revert back to the comfortable familiarity of routine.

So, what’s a “life hacker” / “chief hustler” to do? I use Habit Helixes. A Habit Helix is a tool that you can use to reconcile the advice of making small, incremental changes with the desire to see big improvements. This post is going to be a conceptual overview of Habit Helixes. Probably in a future post I will offer a step-by-step tutorial on how to use them.

What are Habit Helixes?

Habit helixes [4] are intertwined success spirals that feed off each other in a trigger-routine-reward habit loop.

Okay, that’s a lot of jargon to unpack. If you don’t know what a success spiral is, it’s a motivational tool that allows you to start small and build big. It helps you build a habit chain by starting with small goals that are impossible to fail (e.g., run for 10 seconds) to build expectancy. Over time, as you build your expectancy by meeting your goal day after day, you can promote your spiral to a more ambitious goal that you are already meeting by out performing your minimum (e.g., from 10 seconds to 30 seconds to 1 minute to 5 minutes to 10 minutes a day). Success spirals are a great way to get started on making progress towards important but non-urgent goals. Read “The Motivation Hacker” or my previous posts about success spirals and how I’ve used them to great effect.

If you don’t know what a trigger-routine-reward habit loop is, I recommend reading “The Power of Habit”. I’ve also written some about it in previous posts. In short, habits are most effectively formed when performed after a consistent trigger and when a reward is consistently provided. The trigger-routine-reward habit loop suggests that when forming a habit, you should set an explicit trigger and reward. A trigger can be anything that commonly occurs daily: for example, a time-of-day, a thought, an action. A reward can be any small thing that you like: a pat on the back, the satisfaction of checking a box, a cookie. The routine is just the habit you are trying to perform.

Okay, so how does all that come together? Well, success spirals help you gradually commit more of your time and energy to the routines that you want to perform every day. Trigger-routine-reward habit loops help make your performing those routines automatic (i.e., habitual). Habit helixes combine these two motivational tools so that you can make gradual, small progress on many different goals so that you can see a big change in your day-to-day immediately.

How do Habit Helixes work?

Habit Helixes situate success spirals in a trigger-reward-routine loop and relate independent success spirals to one another. The premise is that the situation and interrelation of many success spirals into one larger trigger-routine-reward habit loop will produce a cumulative effect that is greater than the sum of its parts.

In this way, Habit Helixes not only help you build your routines from small to big, but also make progress in any one spiral motivate progress in all spirals. In this way, while you are still making small, incremental and steady progress towards any individual goal, the cumulative progress across all goals yields large, noticeable change in your day to day. Small, simple execution for large, overall results.

How to use Habit Helixes?

I plan on writing a more in-depth tutorial sometime. But, in short, three are four steps.

First, set up your success spiral structures. I’ve written a tutorial about that already. You’ll need to be running at least two spirals at a time in order to use a Habit Helix.

Second, pick a reward for each success spiral routine. The reward should be something small that is easily accessible immediately every time you complete your routine. The reward should also be something that you don’t otherwise get (to strengthen the relationship between the routine and the reward). A common choice is something like candy, but it doesn’t have to be anything consumable. For me, the reward is as simple as entering my progress in my success spirals spreadsheet. For you, the reward could be watching a YouTube video or reading a book you enjoy.

Third, pick an initial trigger for your first routine. The trigger should be something that occurs at least once every day, without fail. For example, it could be something like waking up, taking a shower, or eating lunch. Make sure that you have enough time to complete all of the routines that you will need to complete after the trigger.

Fourth and finally, determine how you want your spirals to relate to one another. As I mentioned earlier, I do this in two ways: first, I make the routine for one spiral a trigger for another; second, I make the successful completion of one spiral affect the reward of another. For example, reading more academic papers is one of my success spirals. Working out is another. So, I might make reading an academic paper for X minutes a trigger for working out. I could also make the reward for reading an academic paper AND working out something bigger than if I just did one of them — maybe I get to watch an episode of my favorite show or play a game for 30 minutes. I’m sure there are other methods of interrelating success spirals that can create a motivating externality. I’m in the process of experimenting with this, myself.

Habit helixes are not the most simple to use. So, I don’t necessarily recommend adding all of this complexity until you’re already fairly comfortable with success spirals. That said, you’ll do what you want, so just enjoy the process!

If you liked my live success spiral walkthrough, I’d be happy to do a live Habit Helix walkthrough sometime in the future. If you’d like to see that happen, let me know through Twitter, Facebook or a comment below.

[1] I think success spirals may only be unexciting in theory. In practice, I have always been invigorated by them. Something about building momentum and crushing the minimum acceptable goal fires me up.

[2] Start-up costs include getting the right tools (e.g., for a blog, you may need to install word press) or doing background Research (e.g., for a sci-fi novel, you may need to start reading up on pop science accounts of advancements in bio-tech). Just getting to the point where you can actually make progress on a goal can be time-consuming.

[3] To a point. Burnout is real and you want to manage your energy levels so that you are excited to do something every day, not just one day.

One thought on “Habit Helixes: The case against small change”