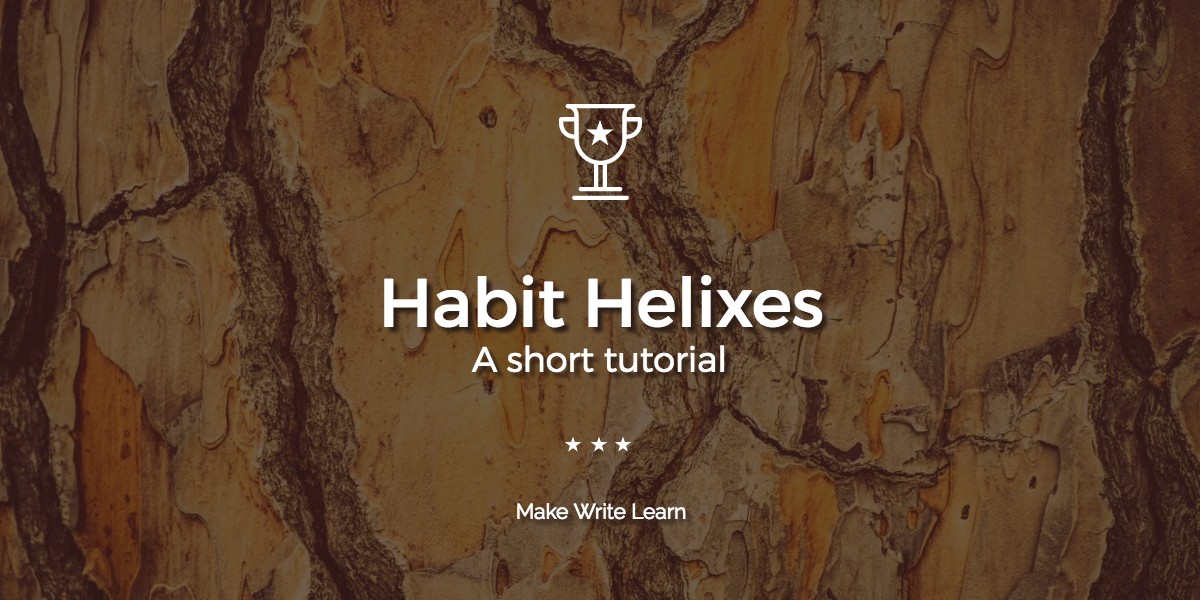 I’m going to teach you how to use habit helixes.

If you don’t know what those are, read my previous post. In short, habit helixes intertwine multiple success spirals into a domino chain and embed them into a tigger-routine-reward habit loop. They should be useful for people who already know how to use success spirals and who want to accelerate progress.

But, also, I don’t have any empirical evidence that habit helixes will work for you — I can only tell you that they have worked for me [1]. Your mileage may vary.

You’ll need to pick at least two routines or habits that you’d like to make progress on daily. I recommend starting with just two. You can add more once you’ve got the hang of it. For now, the more spirals you choose to intertwine, the more complexity you add to your routines. More complexity means a greater chance to fail, and failure with habit helixes can be spectacular (because your spirals will be intertwined and dependent on one another).

2. Set up spiral structures for those routines

Once you’ve picked your two routines, set up their spiral structures as you normally would. I’m not going to talk about how to do that here because I’ve written about that previously. Keep in mind that, conceptually, success spirals should start at a point so comically simple that it is impossible to fail (e.g., write 1 word for your novel in a day). The idea is that you just make the starting condition so easy to pass that you can do it without a second thought, even a minute before you go to sleep. In practice, you’ll do a lot more just by having started.

Promotion should be incremental and take you gradually towards your desired daily commitment (e.g., 1 word -> 10 words -> 50 words -> 100 words -> 150 words -> 250 words -> 400 words). I don’t necessarily recommend picking all promotion levels ahead of time at the beginning. I typically pick the promotion levels just one step ahead at a time.

Do this independently for each routine you’d like to develop.

But, of course, there will need to first be an external trigger to initiate the domino effect. External triggers can be anything that occurs regularly — ideally every day — that is not directly related to your habit building routines.

For example, a time of day (e.g., 3pm, dinner time), an action you must take (e.g., waking up, starting your car, locking your door, writing your first e-mail of the day), an observation (e.g., first person you see biking to work), or just an environmental cue (e.g., first light). You get the idea.

Pick an external trigger that you would like to trigger the domino line of your success spiral routines. One thing to note is that you should have enough time to do all of your routines: so picking a time-of-day cue that is sandwiched between meetings would not be ideal.

My external trigger cues tend to be more systematic than happenstance because I typically do not want to pay too much attention to notice a cue. So, it might be waking up or coming back home from work or 8pm. You might want more whimsy in your life, though.

One last thing about this: once you’ve built up your routines, they might take up a lot of time. Perhaps more time than you’re willing to spend in one contiguous block. If that’s the case, you might consider splitting your routine chains up into halves or thirds with multiple triggers through out the day.

For me, just marking down that I have beat my minimum objective in the success spiral spreadsheet is typically reward enough for any one routine.

But don’t feel guilty about giving yourself a bigger reward either, especially in the earlier phases. If you find that you need to offer yourself candy or game playing time or a meal out in order to get yourself motivated, then do that. You’re harnessing your willpower to meet your goals already, so don’t feel bad about indulging a little once you’ve accomplished what you’ve set out to do.

6. Stick by the rules you’ve laid out for yourself

You’ll think that it’s okay to re-order your routines a bit, or to skip your rewards or to be a bit lax on your triggers. It’s not: your reptilian brain doesn’t understand nuance and complexity, it understands only cause and effect.

If you truly want these routines to embed, you need to drink the Kool-Aid. It sounds ridiculous that your body can be trained, Pavlovian-style, to respond to simple stimuli because of a trivial reward. It’s not. You’ve still got a little lizard in you, and it responds really well to habit loops. If you want to learn more about this, I recommend reading The Power of Habit.

Yeah, habit helixes can be complex. I don’t recommend using them unless you’ve already built up your expectancy through using success spirals before. I’m actually currently working on a side-project to make tracking these things a lot easier. Until that’s released, though, I recommend using spreadsheet software. In my previous live success spiral walkthrough, I shared a Google Sheet that illustrated how I keep track of my success spirals. Habit Helixes are similar: one sheet per success spiral, with an additional two fields that list trigger and reward. If there’s enough interest, I might do a live Habit Helix walkthrough — so, let me know in the comments or via Twitter.

If spreadsheet software is too complicated, never underestimate the power of pen and paper. Keep a little graph paper journal with you and track your progress in it daily.

That should be enough content to get you started. Like I said, habit helixes are not the simplest motivational tools to use. They’re powerful, though, and if you’ve already had luck with success spirals and want to up your game a bit, give them a shot.

Also, if you’d like me to do a live habit helix walkthrough, let me know in the comments or via social media. If there’s enough interest, I might be convinced to do it!

[1] I recently had a conversation about dogma and about how my blog is dogmatic. Maybe that’s true, I want to change that. Nothing I say on here should be considered The Word of Law. I’m just a guy trying to figure stuff out.

[2] Success spirals are not necessarily the only way to intertwine habits, but if you’re not using success spirals then you’re just using the trigger-routine-reward loop where the routine of one habit triggers the next.