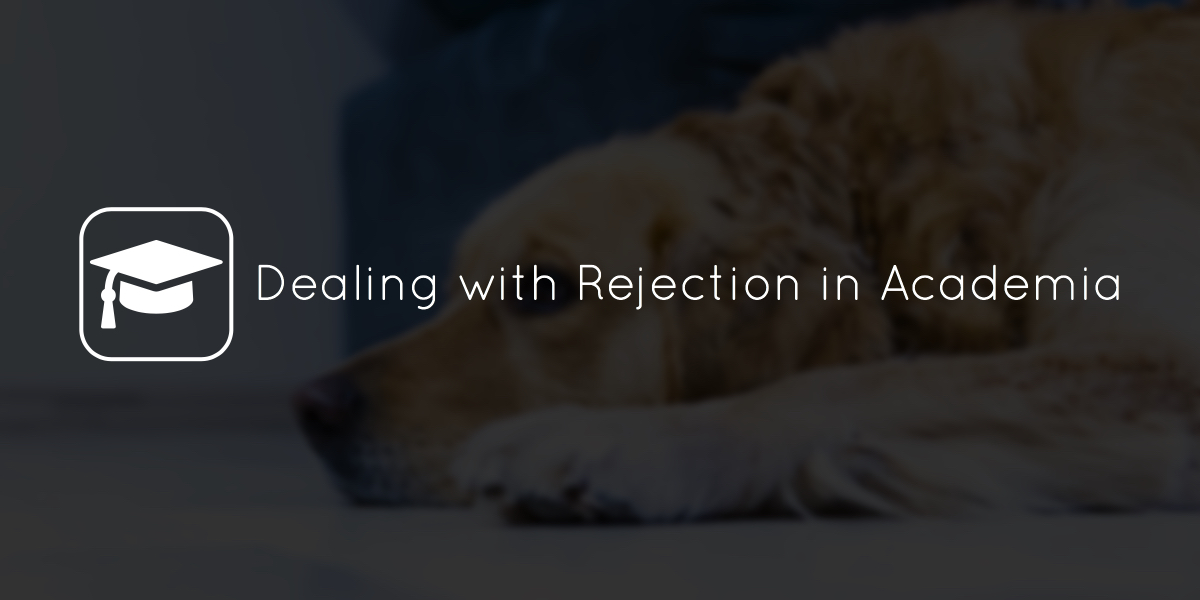 Hi, younger me. You don’t know this yet, but the path you’ve chosen is one of brutal, unrelenting rejection. You’ve coasted through everything you’ve done in life so far. But you’ve met your match in academia. Everyone here is just as smart, if not smarter. They’re just as hard working, if not more so. Hence forth, your peers will be some of the most intelligent, creative and driven people in the world. They’ll be your greatest source of inspiration and intellectual stimulation. But they’ll also be your greatest competition. For every paper you write, fellowship application you submit, and job application you assemble, you will be competing against others who are just as smart, hard-working and motivated as you.

You won’t succeed right away. Every first author paper you write in your first year of graduate school will be rejected. Most first author papers you write in your second year of graduate school will be rejected. The constant rejection will get to you. Thus far, you’ve derived a lot of your identity from being “smart” — or even the “smartest” — but it’ll be hard to hold up that identity when you see everyone else around you succeeding but have nothing to show for your own efforts. You’ll question whether you belong. And even when you start succeeding, you’ll continue failing, a lot, in between each success.

Here’s the thing: academia is all about rejection. No one ever tells you that before you make it to graduate school. From the outside, all you ever see is the cutting-edge interaction technique, clever algorithm or insightful study that wins awards, is picked up by the press, or gets cited a thousand times. And from the inside, all you ever see is tweets and Facebook posts about how everyone else is winning awards, being featured by the press, or getting cited a thousand times. But the truth is that lying in shadow of each of those amazing accomplishments is the crushed dreams of a thousand baby graduate students.

Okay, that’s a bit of an exaggeration, but you get the point. Don’t misunderstand, though. I’m not here to tell you to run away from this life. For all the ego shattering, academia can also be wonderfully fulfilling. Because once you (finally) taste success, you’ll realize that there is nothing sweeter. Instead, I’m here to give you some advice on how to productively deal with rejection. You may as well experiment with the advice: I can assure you that you will have plenty of opportunity.

1. Don’t take yourself (or your reviewers) so seriously

Sometimes, it will feel like your reviews are a personal affront to your character. It will feel like you’re the subject of a 4chan smear campaign. And, to be fair, you might feel this way because many reviewers are just complete tools.

But, remember, it’s not about you. Your reviewers don’t know you, and wouldn’t even if they saw your name. It’s also not about them, though you might argue that they probably did not receive enough love from their mothers.

Your reviews may not be fair or accurate, but that’s not because you’re a bad or stupid person. It could be because the reviewer is a bad or stupid person, but it probably isn’t. More likely, there was a legitimate issue that you had not considered in your work. Most likely, you were not able to adequately communicate your message. And even if it’s neither of those and the reviewer was simply a bad and stupid person, that’s okay. You’ll make your paper better just by having more time to think about its potential weaknesses. And your work will be better for it.

2. Remember that you don’t need to sprint

There’s another reason, aside from the ego-shattering, that you’re afraid of rejection. You think you need to sprint to the finish line — whatever that is. For every paper you don’t publish now, you’re falling behind the illusion of your ideal self and your peers. By year 2, you’re supposed to have 6 publications. By year 3, your h-index should be 8. By year 4, you should have won a Turing award.

Then comes along this rejection — this little, nagging thorn on your side that surfaces all of your insecurities. Its gets in the way of your grand vision. It pushes back your Timeline to Greatness by several, precious months.

But you’re not in a dash. You’re in a marathon. If all goes well, you have another 30-40 years to do great research. So what if your paper didn’t get in to CHI 2012? Think about how inconsequential the difference between ‘CHI 2012’ and ‘CHI 2013’ will look 10 years from now. Keep in mind that your true purpose is to do great, timeless work — publishing is just a reflection of that.

3. Focus on process, not outcomes

I know, I know. “Don’t take yourself so seriously” and “You’re not in a race” is cliche advice that is easy to give in retrospect. The reality of the situation is that timing sometimes does matter. Winning a best paper your first year could open up networking opportunities early in graduate school. In turn, you might have more time to build and foster important relationships that can help you get your dream job later. In that respect, it’s definitely better to publish in CHI 2012 than CHI 2013, if you can.

In other words, don’t focus on the outcome of your work. Don’t muddle your mind with the number of papers you need to publish at CHI, or how many best paper awards you can rack up before you graduate. Focus only on the process. Focus on doing good work. Everything else will follow. I promise.

4. Know that it’s not just you

Right now, you probably think that you’re an especially spectacular failure. You probably think that you’re the only one with nothing to show for all that time you invested. But, you’re not. About 20% of papers submitted get accepted. There are definitely more people who feel like you, right now, than like the person posting on Facebook about how 4 of their papers got accepted.

While we’re on the topic, though, don’t be jealous of that person either. Be happy for them. They’ve probably felt the same feelings of inadequacy that you are currently feeling, but they’ve managed to work through those feelings and experience great success. Don’t resent that. Celebrate it. One day, that’ll be you.

5. It’s okay to feel bad about this

Remember that feeling sad is perfectly fine. It sucks getting rejected. It really, really sucks. You poured so much of your time and soul into producing this 10-page document, and to hear that it’s not good enough is crushing. And it should be crushing. Don’t fight that feeling. Accept it. Learn from it. Then harness it to do better. Use it as your fuel.

Right now, you fear rejection. Things have always gone your way, and you’re afraid of the consequences of failure. Rejection sucks, yes. Failure sucks, yes. But don’t fear rejection or failure. The more you fear rejection, the less likely you’ll be to expose yourself to opportunities that can change your life for the better. You’re eventually going to win best papers, have the press cover your work, get cited a bunch of times — everything you’ve always wanted. But none of that is going to happen if you fear rejection enough to quit. Embrace rejection. Revel in the challenge. If there was no risk in putting your work out there, there would be no reward.

Okay, younger me. I have to get back to working on our thesis. It’s going to be epic, and, no, it has nothing to do with what you think it will be. Remember that rejection is not the end of the world. Remember that it’s okay to feel bad about getting rejected, but that it’s not okay to be so resentful of rejection that you quit or become the tool-ish reviewer you despise. Do that, and you’ll do just fine.